You are here: Home1 / Store 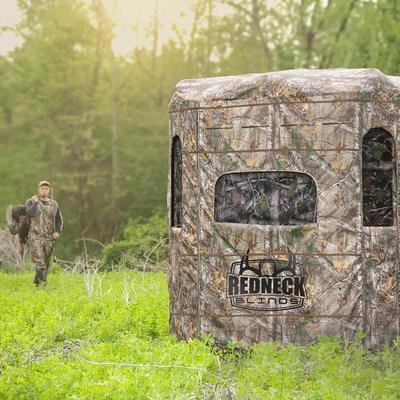 With its spacious 6-foot by 6-foot interior, there’s plenty of room for up to three adults or two adults and two children to hunt comfortably—whether that’s with a bow, gun or crossbow. The Redneck 6X6 Soft Side Camo Deluxe 360 blind sports a heavy-duty double-stitched 600 denier flame-retardant camo cover, and the double-zipper design allows the windows to be opened to any configuration for maximum visibility while maintaining the highest level of concealment. The camo cover features brush in straps pockets and bungee cords so you can brush in with native foliage to hide it from your trophy buck or that huge gobbler.

The Soft Side Camo Deluxe 360 blind also features a semi-permanent heavy-duty powder-coated steel frame that is built for the toughest of conditions and snow loads. The frame is constructed of heavy duty tubular steel and bolts together in about 35-45 minutes.

Save this product for later
berryville VA weather forecast